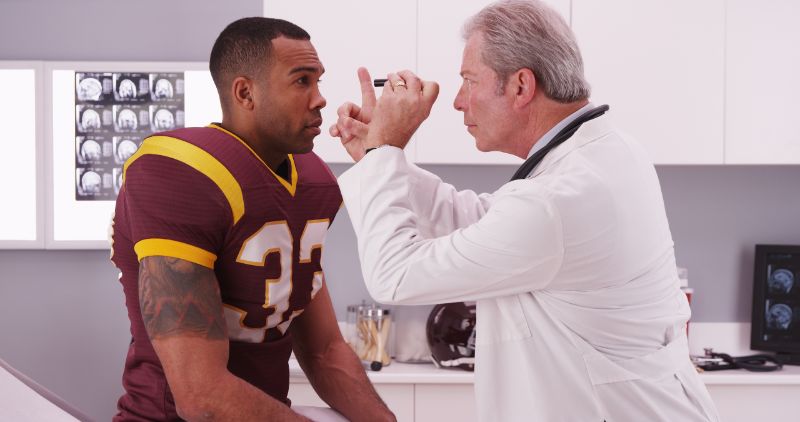 A concussion is a complex brain injury that affects brain function. The effects are often temporary, causing headaches and problems with concentration, memory, balance, and coordination. Not all concussions cause you to lose consciousness.

Concussions are more often seen among athletes who play contact sports, such as football, hockey, and soccer. However, athletes are not the only ones who get concussions. Concussions can also result from a blow to the head, violent shaking of the head and upper body, trauma, and falls.

Here are some facts about concussions:

Concussion symptoms may be immediate or delayed onset, sometimes by a few hours or even a few days after the injury. Symptoms may include:

Annual baseline testing is recommended for every athlete (in most sports). Since every concussion is different, it is important to know your baseline to see the severity of your trauma. Baseline Testing helps us learn how your brain works before a concussion, giving us a better understanding of your Reaction Time, Memory Capacity, Speed of Mental Processing, and Functioning of the brain.

During your visit, your doctor will evaluate your signs and symptoms and review your medical history. He will also conduct a neurological examination, including checking your vision, hearing, strength and sensation, balance, coordination, reflexes, and cognitive skills. Cognitive testing evaluates your thinking skills, addressing several factors, including your memory, concentration, and ability to recall information.

If you have symptoms that are becoming worse, your doctor will order brain imaging tests, such as a cranial computerized tomography (CT) scan to assess the brain right after the injury or a magnetic resonance imaging (MRI) test to identify changes in your brain or to diagnose complications that occur after a concussion.

Treatment for a concussion begins with relative rest for 2 days, which includes limiting activities that require thinking and mental concentration.

In the first 48 hours after the injury, you should limit activities such as playing video games, watching TV, doing schoolwork, reading, texting, or using a computer, especially if they seem to worsen your symptoms. You should also avoid general physical exertion, sports, or vigorous movements until you can do them without experiencing symptoms.

After these 48 hours, you can gradually increase daily activities such as screen time, light exercise, and physical activity as tolerated. Avoid any high-impact activities that could cause another head injury until you are fully recovered. Consult with your doctor to discuss steps you’ll need to take to play sports again. Resuming play too soon increases your risk of another brain injury.

If you are experiencing headaches, you can take acetaminophen (Tylenol). Avoid taking ibuprofen (such as Advil, Motrin IB) and aspirin, as these medications may increase the risk of bleeding.

If you suspect that you may have a concussion, please call OrthoMed Center at (209) 524-4438 to schedule a consultation. You may also request an appointment online.

Specialties
Foot & AnkleHipKneeShoulderJoint ReplacementSports MedicineTrauma CareRegenerative Medicine
About Us
OrthoMed Center aims to be the preferred provider of high-quality musculoskeletal care to the people of Modesto. We provide cutting-edge medical care while also ensuring we treat patients and their families with the utmost compassion as they find their way back to good health.
Talk To Us
2023 All Rights Reserved
| Privacy Policy  |Terms of Use  |

This website uses cookies so that we can provide you with the best user experience possible. Cookie information is stored in your browser and performs functions such as recognising you when you return to our website and helping our team to understand which sections of the website you find most interesting and useful.

Strictly Necessary Cookie should be enabled at all times so that we can save your preferences for cookie settings.

If you disable this cookie, we will not be able to save your preferences. This means that every time you visit this website you will need to enable or disable cookies again.